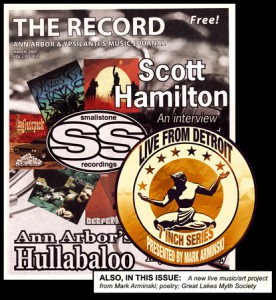 Mark Arminski, one of Detroit’s world famous concert posters designers, has a new project in the works, and it is quite an ingenius one at that. Arminski, who has produced artwork for everyone from The Ramones and The Beastie Boys to Arlo Guthrie, takes his love for music a step further with a series of vinyl recording titled, Live from Detroit. Each record in the series will be a recording of a band’s live show, and the album cover will consist of the concert poster Arminski did for that particular show.

The first band to be featured in the series is The Dirtbombs, whose style is made up of heavy surf sounds, crossed with Ron Asheton-esque guitar licks. Also, they’ve been known to do a spirited rendition of The Eurhythmics’ “Missionary Man.”

The Dirtbombs’ Live from Detroit album was recorded last year at the Stick, and is out now. The next two bands to be featured as part of the project are The Hard Lessons and Sponge. The cover for Sponge’s 2002 live CD For all the Drugs in the World was done by Arminski. Although Arminski says he’s “not a big vinyl guy” he started this project as a means of showcasing local bands which he felt deserved some additional exposure. The recordings are good enough to make you feel like you’re seeing the bands live at the bars where they were recorded. However, what’s most noteworthy is the top notch rock art.

Arminski started doing rock art only after having been a music fan for many years. He wasn’t working in the art scene so much as having a good time in the 1960’s and 1970’s. When it came to partying, Arminski indulged in the excesses of the age. “After a while I knew I had to get out of it or it’d kill me,” Arminski says. “A lot of people I knew had died and I figured I was next. At that time my personal life was so out of wack, I came to art to get balance. I used to go to the Grande Ballroom shows in the ’60’s, but I wasn’t involved in making art for the scene until later on. I got my start by doing flyers for Keith Howarth at Noir Leather.

Prior to that I’d done tattoos. Bill Pogue taught me how to do tattoos back in 1968.” Arminski’s studio is in the old Zubkoff Gasket Manufacturing building in the Russell Industrial Complex off I-94. He recently did some advertising design for Camel cigarettes. Arminski’s cigarette packaging combines old school Camel iconography (pyramids, palm trees, etc.) with bold pop art coloring and flair. “I was limited in what I could do. It couldn’t be cartoony and they didn’t want anything associated with death. No skulls, dragons, no hearts. I guess they didn’t want hearts because of smoking and heart attacks.”

Arminski has also done work for films. “Mostly stoner movies,” he says. “Half Baked and Harold and Kumar. There was also a poster of mine in Howard Stern’s movie Private Parts. It was a Doors poster and it was over his shoulder for a long time in the movie.”

Arminski counts Stanley Mouse and Gary Grimshaw as big influences. “It’s true; Gary’s knack for symmetry and balance has had a strong effect on me.” Concerning contemporary pop art, Arminski says, “not much impresses me because I don’t impress myself. I like the great masters. These days there’s so much out there that something has to really be unique to stand out. It has to have a distinct style.” The Live from Detroit series is helped by Noiseville Records in New York, with only 1,000 copies if each record pressed. Noiseville sums up the project by saying, “each cover folds open into an Arminski concert poster for the show that the single was recorded at. How friggin cool.”