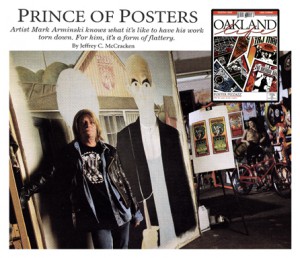 Now you see a Mark Arminski –  designed rock poster. Now you don’t. You may have run across his multicolored promotional music posters pasted up somewhere around town. Maybe in a record store, beckoning you to show at Industry in Pontiac, or luring you downtown to the State Theatre or St. Andrew’s Hall. They tend to grab your attention with following typography and psychedelic designs.

If you’ve seen the posters, odds are you didn’t see them for very long. Arminski’s distinctive work with Ghetto Press has become so popular, his concert posters often are torn down by collectors and music fans within days of hitting the streets. “Sometimes we have a problem with people tearing these down as soon as they are put up,” laughs Arminski as he motions to a wall of rock posters ranging from Iggy Pop show to one of his first broadsides ” a 1987 promo for a concert by the late Rob Tyner of the MC5.

Less than three years into a full-time working relationship, Artminski and Ghetto Press owner Kris Dorris have gained lots of fans, both locally and nationally. From the bowels of the grungy, dilapidated Russell Industrial Complex in Detroit that Ghetto Press calls home, Arminski produces some of the country’s most vivid and talked-about-concert posters. His work has a distinctly 1960’s feel and poster-art collectors rave about his lettering style. Arminski is one of the few artists who draws most of his work by hand. The resulting pieces mesh well with Dorris’ printing style, which imbues each poster with a swirling, paisley-like background. Each one is rendered in a different shade. “Mark captures the spirit of a show, ” says Nigel Productions’ Connie Pampinella, who has worked with Arminski on several shows. “His work is what I’d call sarcastically real” Dorris started Ghetto Press in 1991, three years after he created the popular Ghetto Rags clothing line with partner David Pardo. Arminski, 43, first worked with Dorris on a poster for Noir Leather in Royal Oak.

He moved into Ghetto’s inner-city home in 1992. The success of Ghetto Press’ poster artwork has renewed Detroit-area interest in the buying, selling and collecting of poster art. “Mark’s work, along with Kris’ printing, has made me believe in poster art,” says part-time rock-poster event promoter Rick Manore. “Mark’s lettering his typography, is the best in the graphics art world. It’s Gothic, yet whimsical. He is a hippie at heart, and he know how to make the posters connect with the event.” Manore, who put on a rock-poster show in September at the Ubiquity Gallery in Ferndale, hosted Arminski and former Detroit rock-poster legends such as Gary Grimshaw (known for this Grande Ballroom posters) and Stanley (Mouse) Miller, who has done album covers for the Grateful Dead, Steve Miller and Journey.

In October, Arminski gained prominence on the national scene with a poster for the Rock Poster Expo 93, a San Francisco exhibit that showcased the country’s finest poster artist. Ghetto Press’ entry depicts two hands holding up several Arminski posters, set against an orange sky with a silvery-gold background. A graduate of Oakland Community College with a two-year degree in graphic and fine arts, Arminski also attended the Center for Creative Studies in Detroit for more than a year. An artist for 27 years (his first paid gig was painting for the Birmingham Teen Center in 1967), Arminski also has held a variety of odd jobs and has taught himself a mixture of unusual skills. He’s worked at Detroit’s Harper Grace Hospital in a clerical position, and he spent several years as a printmaker, “cranking out the kind of stuff you’d see above someone’s toilet.” Arminski also had dabbled in body painting – he even tried his hand at tattoos. He’s had studios in Pontiac and Royal Oak, and handled several illustrations and poster designs for Noir Leather. In the mid-1980s, he sketched pizza box covers for an advertising agency, including the pizza box design currently used by Anthony’s Pizza in Royal Oak.

The south Oakland County area houses a lot of Arminski’s non-poster artwork. He’s done murals at Monterrey in Royal Oak and the West Bloomfield outlet of Mr. B’s Food and Spirits. Arminski also redesigned menus for the Mr. B’s chain. In the meantime, Manore is trying to open a coffeehouse with a rock-poster motif ‘ The Psychedeli ‘ in Royal Oak area, It would feature a mail-order system aimed at the exclusive distribution of Ghetto Press art. That would please Arminski, who sees the poster-art business as a way to do something he likes that will eventually allow him to do more of something he loves: pure painting. “I’d love to paint more and more. It has less limits, less constraints. I’d like to get a villa in the Yucatan Peninsula in Mexico for three months a year and just paint. I think I could get good if I could do it full-time,” he says. In the meantime, Arminski feels pretty good about his place in the poster-art world. “Hey, it sure beats painting pizza boxes.”