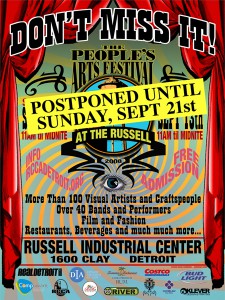 Last year over 4,000 people joined over 200 visual artists, filmmakers, musicians and other performance artists to celebrate the inaugural launch of the People’s Arts Festival (PAF) at The Russell Industrial Center in Detroit. This year’s Festival planners expect that crowd to double – once again securing its claim to being the largest arts festival in the City of Detroit.