Welcome To The Show – The Poster Art of Mark Arminski 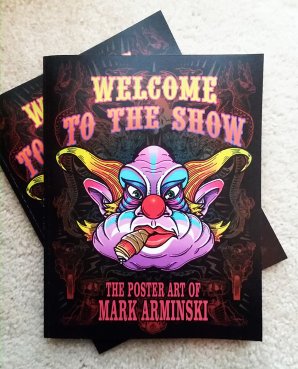 ARTIST “BOOKS” THIRTY YEARS OF HIS LIFE, HIS ART AND HIS LOVE FOR ROCK MUSIC Mark Arminski, one of Detroit’s most acclaimed masters of graphic design, has finally found time to put three decades of his life and work into a book. The finished volume, Welcome to The Show, is not only a colorful summation of what Arminski has done (and continues to do with undiminished energy), it’s also a vivid history of the Motor City’s well-deserved reputation as America’s most rock-enthused town. Starting in 1988 when the youthful Arminski approached several commercial establishments and record stores with an offer to create original advertisements, the book quickly focuses on his subsequent career as a poster artist for local music venues – a role that found him fashioning vivid broadsheets for Eric Clapton, Iggy Pop, David Bowie, Los Lobos, Smashing Pumpkins, and dozens of others. No less importantly, Arminski also lent his skillful focus to a host of Detroit-area bands playing everywhere and anywhere during those same years. The text accompanying the artwork is also noteworthy. Arminski is generous with expressions of gratitude and praise for the many people who assisted him in the early years of his career and encouraged the broadening of his goals. Johnny Bee Badanjek, former drummer for Mitch Ryder and The Detroit Wheels and a recognized painter in his own right, has this to say about Arminski’s accomplishments: “What amazes me is that Mark has literally done hundreds of unique and colorful rock posters. He’s a great artist and one of the best in a visual genre that is frequently overlooked by critics. He’s one of several names I specifically tell people to look for in The Art of Modern Rock and without hesitation I place him on the same level of excellence as Stanley Mouse and Alton Kelley. This is TALENT that deserves both praise and recognition.” Ryan Mathews, one of the principal figures behind Detroit’s People’s Arts Festival, pays a singular tribute to his colleague and friend: “Control and consistency of line are critical to every artist. Many people think of Mark as a rock&roll demigod known exclusively for his concert posters of Iggy Pop, Patti Smith, and others. But as the work in this long overdue volume demonstrates, his vision – the statement of his personal aesthetic – follows a strong and controlled and consistent line that is simultaneously informed by and transcendent of Detroit. I’ve had the pleasure of having a studio just down the hall from Mark’s for over a decade. It’s given me the chance to see his work from high school paintings to the posters and to the decorated skulls and beyond. And I’ve had the privilege of hearing him explain different pieces – many as they were in the very process of being created. He is a great treasure whose work deserves to be viewed as a collective accomplishment – each piece being an installment of his unique vision.” And adding a very personal note of admiration and thanks is acclaimed artist Glenn L. Barr: “It was Mark’s work in concert posters that inspired me to pursue the same path. His design and graphic aesthetic was unparalleled and I really wanted to join in on the fun. It was a lot harder at first than I anticipated and he made it look so effortless, but with a few pointers he guided me through my first prints. I managed to work successfully in that area for several years before I began to explore other artistic endeavors. Let me add an interesting note here. I look back and think now that it was fate that first brought us together. I needed a place to work and he was moving out of his studio at roughly the same time, so I simply moved in and took over his old space. He was such a warm and affable guy that we became instant friends and we’ve remained so to this day.” Copies of Welcome to The Show may be obtained at www.arminski.com. Inquiries or questions for Mark Arminski should be sent to info@arminski.com. Over 100 full color pages. Intros by Detroiters who were there. Soft cover. Signed and personalized by Mark Arminski. 2nd printing. Only 200 available.

Free USPS ground shipping to lower 48 states only.
Insurance or other shipping services,
please contact us.

Prices and availability subject to change without notice.